Under the Hood of GreenLight 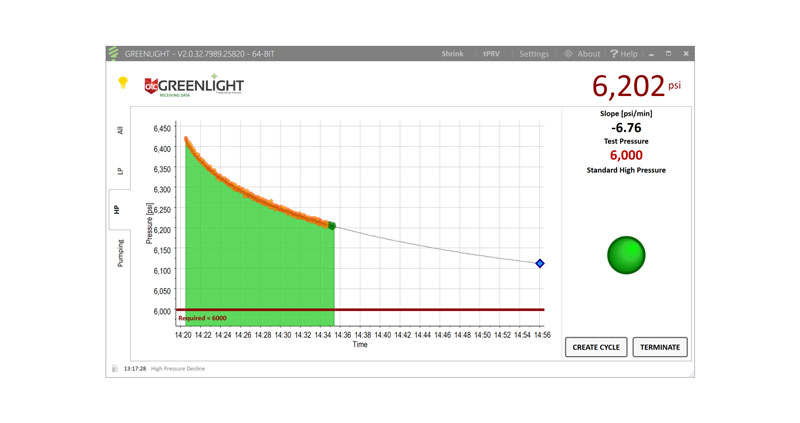 An important part of OTC Greenlight, is the ‘analyst.’ The analyst is a type of engine that takes time and pressure data inputs – typically once a second – and yields easily interpreted results of digital pressure tests in real time. Analysts are categorized as either ‘high pressure’ or ‘low pressure.’ When Greenlight runs in the Gulf of Mexico, the ‘standard’ low pressure analyst and the ‘standard’ high pressure analyst are used with configuration settings that were approved by the Bureau of Safety and Environmental Enforcement (BSEE) in 2015 (and again in 2017) for subsea BOP testing. Sometimes, an existing analyst can be configured differently for different purposes. For example, stump testing of a BOP on the deck of a drillship requires a configuration change of an existing analyst(s), not the use of different analyst. However, Greenlight was designed from day one with the capability to add completely new analysts, to better serve the demands of diverse markets and geographic regions.

The Analyst in Action

Greenlight is inherently designed to be ‘plug and play’ with different analysts. The behavior of the integrity analyst is shown in Figure 6. Unlike the standard high pressure analyst, the criteria for an integrity test means that an integrity test can only be called a ‘passing test’ after 30 minutes of data have been acquired. Rather than try to modify the standard high pressure analyst to accommodate this, a dedicated integrity analyst was added to GreenLight. Similarly, in the North Sea a different set of criteria are used to define a subsea BOP test as passing than the criteria used in the Gulf of Mexico. There, a passing test is considered to be data that doesn’t drop more than 2% in 10 minutes. To address this different need, a new analyst was written, tested and added to GreenLight.

Essentially, instead of trying to cram all possible required criteria into a single analyst, we build new ones to serve different purposes. Greenlight enables us to do that.

Serving Different Markets Around the Globe

GreenLight analysts have the ability to be designed specifically for different markets with different requirements, specifications and needs. If a new customer comes along with a new requirement, we are able to adapt to their needs and provide the analysis they need to achieve regulatory compliance requirements – anywhere in the world – or to meet their own internal requirements.

The software is being deployed in many different places around the globe, but Norway is a particularly interesting area. We are extremely excited to have experienced some excellent support on a pilot study we performed recently in Norway, and look forward to continuing to grow in this region, thanks in large part to the adaptability of our analysts.